Private Hiram Honaker entered military service at Flemingsbury, Ky., in 1864 as a private in Company A of the 5th U.S. Colored  Cavalry and was honorably discharged as a private at Helena, Ark., March 16, 1866.  He was 38 years old at the time of his enlistment.

In March 1971, a replacement tombstone for Private Honaker was placed on his grave located at the John Cox Cemetery on the Wright Patterson Air Force Base in Dayton, Ohio by Brig. Gen. Edmund A. Rafalko, 2750th Air Force Base Wing Commander. The Memorial Division of the U.S. Army provided the new stone in response to a request from Representative Henry B. Gonzalez (D-TX). A constituent of Congressman Gonzalez had read a news story on the cemetery and noted that Honaker's grave maker had become obscured by age. His wife and daughter are also buried in the cemetery. 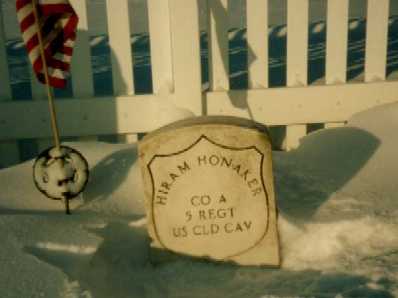